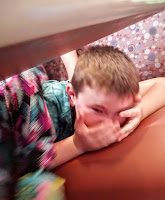 The grandkids were out of school Friday, so we spent a long afternoon together. I hoped we'd have a fun filled adventure.

First we went to IHOP for brunch. Charlotte took her brother's picture under the table, because he doesn't like having his picture taken. Guess all the Grandparents have overdone picture-taking for him. 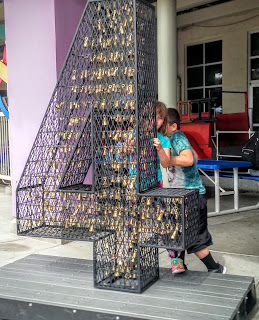 Ben suggested we go to the Omaha Children's Museum. I thought he might be getting "too old". But since it was his idea, I knew it would be fun for us all.

It's the museum's 40th birthday. This outdoor display has been added to the "O" that's been there for years, making it into a huge 4-oh. Giggling the number makes the brass bells tinkle and clang. It's easy to do, but Ben makes it look difficult, because he's hiding from my camera. 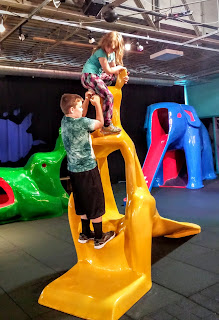 After paying the first stop was the giant animals for climbing. These two climb things everywhere, so why not here. 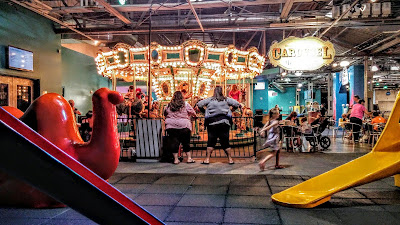 Next I expected they would ride the indoor Merry-Go-Round. It's an extra charge, so I was surprised and thankful when they didn't want to ride. 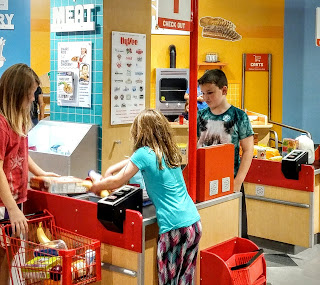 After all the climbing, they scurried down stairs to the new and improved Imagination Playground. While intended for those under 5, my older two gladly played with all the pretend store items.

They climbed around an enclosed "house" and played tag with someone they befriended. 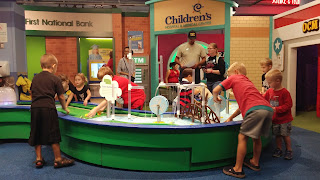 I thought this Platte River water play area would be fun. It's the newest thing in this area. Children play in meandering water, make Lego dams or spray small wheels. Charlotte and Ben skipped it, but I took a picture any way. 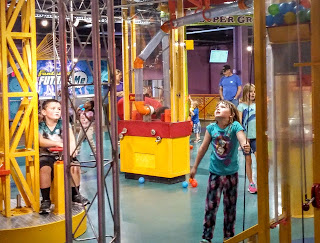 Next they were off to the science and technology hall. The whole room is a humongous ball machine, with pneumatic, hydraulic and mechanical moving parts. Their cooperation and lever turning makes the balls rise, move and fall, intriguing them both. They spent the most time here. 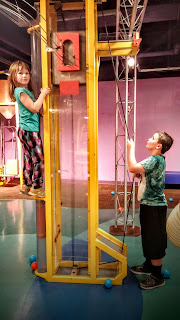 Charlotte also found a place on the Super Gavitron for more climbing... 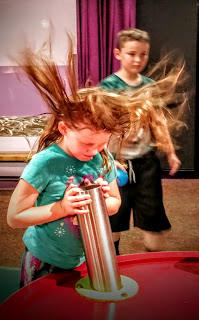 And loved experimenting with the air jet in her hair.

The idea is to balance a ball in the air and see it float. Using your hair is way more fun. 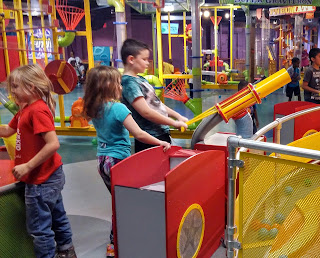 Ben literally got a bang out of the huge pneumatic ball guns.

And Charlotte tries anything her older brother does. 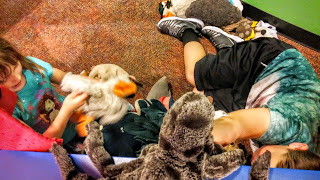 They skipped face painting because it was over crowded and opted to put on their own puppet show instead. 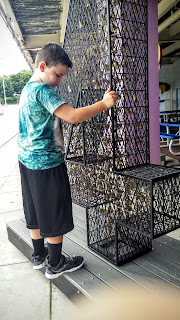 Next they wanted ice cream, but the snack bar was already closed. Instead we left the museum and stopped for ice cream on the way home.


Of course, Ben had to ring the bells again, on the way to the car. 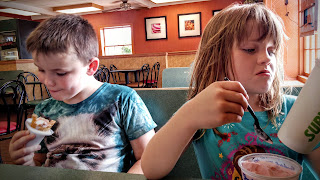 Goodrich Ice Cream is the end of the perfect day, especially when it's bubble gum.

My perfect day was seeing them gleefully enjoy everything we did together. It didn't even feel like I was "baby sitting".

Posted by Sue G. at 5:12 PM
Email ThisBlogThis!Share to TwitterShare to FacebookShare to Pinterest
Labels: Kids