Scroll production is a battle with calligraphy for me. I receive the task, research and plan the script and motifs I want to use. When I begin the lettering, the first and largest permanent motif, I'm tense.

The page is blank and the more expensive the support--Bristol board, pergamenata, or calfskin vellum--the tenser I am. There is a deadline to meet, and the more costly the support the less I want to remove mishaps or restart.

I plan a mock up with letter and spacing. I outline motifs. I practice the script I intend to use. I'm ready to beginI. 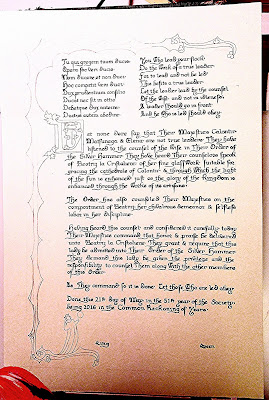 More often than I realized I restart on another page. I know because I am recycling the pergamenata I didn't use, scraping off the errors and using the reverse. I should have enough for 7 more scrolls...if I don't restart them.

I know how to do scripts and how to develop a hand from a period source. But when I letter a scroll I feel the stakes are high, sometimes causing shaky hands and mislettered text.  Corrections work, but they take time and I notice where they were.

I use tricks I've found to get through the lettering. I refrain from caffeine before working. I play quiet background music for a subtle distraction. I use a pre-ruled plastic grid or computer mockup under the pergamenata to reduce errors and save time. I take breaks, but do the lettering within one day.

Thankfully, with practice, I feel the battle receding. I'm enjoying the calligraphy creation, the flowing thick and thin lines even with small letters. The point of making a scroll is to do something I enjoy, that has a purpose and pass it on to someone else. It's a blessing I now feel also with calligraphy.
Posted by Sue G. at 8:43 AM
Email ThisBlogThis!Share to TwitterShare to FacebookShare to Pinterest
Labels: Calligraphy, Confidence, Stress