Saturday Calontir held it's annual Kingdom Arts and Sciences' Competitions in my local group, Barony of the Lonely Tower. After greeting people at the gate and signing them in I had time in the afternoon to view entries and take pictures.

With Easter the next day, we had more attend than expected. A great turn out actually.

The attendance was elevated by 13 Championship entries. The highest number to compete for the honor. I think that's a record.

Each person entering must have three separate entries with different skill sets. Each requires three experts to judge them. That's 39 judges needed just for the Championship part alone, although those judges may also judge Tri-Level entries as well. There were 44 Tri-Level entries. A total of 83 people volunteered to talk with entrants and comment on their work.

Judging is a conversation guided by topics set by each item's criteria with points given for the accomplishment. The judges look forward to the challenge learning from any unique entries or information.


Entering is not an all day thing unless you judge too. It's possible to find time for other things like HL Natalya. She shows her "Sweet Spinach Pie" cooking entry and works on a weaving project.


The 44 Tri-level entries had four in calligraphy and illumination.

Lady Beatrix Bogenschutz from Axed Root recreated a music page from the Copenhagen Chansonnier. She entered at the advanced level. Entering that level is the best way to receive broad-based information. The judges give all the information they know relating to the entry and stringently count possible points.

Lord Hugo van Harlo created a map of his local group, the Barony of Forgotten Sea and its environs. Done in the late 16th - very early 17th-century style Mercator and John Speed used. While researching cartography Lord Hugo learned this style was a "standard" and the initial step in map printmaking. His creation won Judges' Choice.

My intent was to photograph all the "C and I" entries. As you see, entering means at least four people sitting around a table, that temporarily blocks viewing the entry. Sadly I did not photograph the following two.

Lady Ameline de Coity from Oak Heart showcased her Medieval calligraphy and its use for event prizes. She looked at how calligraphy was used during the medieval period and recreated its aesthetic on event prizes.

Lord Hirakawa Kagetora from Aston Tor lettered an Uncial script exemplar based on a circa 8th century Latin manuscript at the Biblioteca Apostolica Vaticana. 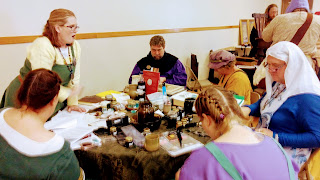 Her first entry created three black pigments produced from one stacked burn experiment. These pigments were historically used for illumination, calligraphy, painting, writing, and staining wood, etc. Their final use depended on the medium/binder in which they are placed. This entry is considered a science because it takes a black pigment period "recipe", creating and compares them. 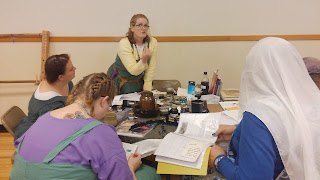 Black Hours manuscripts are rare because they are both expensive and fragile. M. Aidan indicates it is due to the Ferrous Sulphate acidity used to dye the parchment/vellum. Her second entry attempted to neutralize that acidity. It was the process necessary to create a Black Hours illuminated manuscript and "fixed" the acid problem developed by the dying step.


Her third entry was a backlog Laurel scroll created as several pages of the Morgan Black Hours Manuscript. Using the prior steps she black dyed and stabilized the vellum, then lettered and illuminated it. In my last picture, you can see it over the recipient's shoulder as she holds it.

The Calontir Championship winner was--------> HL Viga-Valr Viligisl, also known as Vels inn Viggladi. His three entries were:
I was surprised M. Aidan did not win, because I thought her entry was over the top. But I didn't judge it so I don't know. I'm also biased.

Posted by Sue G. at 7:30 AM
Email ThisBlogThis!Share to TwitterShare to FacebookShare to Pinterest
Labels: Championship, Competition, Event, Lonely Tower