As I grew as a scribe there was a time my illumination skills outpaced my calligraphy skills. In fact, they still do. Back then I wouldn't do the calligraphy on a scroll. Fortunately for me my friend HL Astrid, a talented calligrapher, preferred lettering. So we worked together.

To begin we understood the work would be done by both of us and both of us would receive attention for its creation, along with the text writer. That meant we respected each other's abilities and efforts. We would do our best so we all "looked good".

But not all scroll collaborations are the same. It is vital to know exactly what you are getting into, what each scribe expects from the venture. Maybe even write things down. 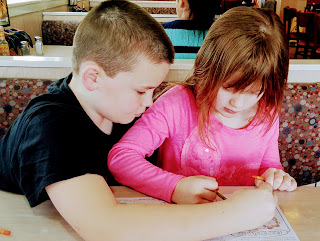 Working in tandem requires an equal open idea exchange and communication on the scroll's intended design, motifs, and processes. Terms may require a shared definition. And debate over a scroll's design or process may arise due to collaboration reality.

For the scroll to work, each participant must know what's expected of them, sometimes down to each detail. Besides the common persona and deadline questions there will be more. How much space will be allowed for the calligraphy or for the illumination? Will there be a 1" or 2" external margin?Who will do the general design and what will it be? Will the calligraphy be done first, as is common, or the illumination? How many times will collaborators meet or the scroll transported between them?

Working in tandem also requires mutual respect and setting aside egos. Those collaborating should strive to reduce confusion to the task at hand and how its later presentation. Avoid hardships and hard feelings during and after the scroll's creation.

Open suggestions like "Maybe you should try this." or "This might work better." may seem as an attack to a scribe's ability. To create the best scroll for the recipient, idea exchange and their communication surmount artistic ego's needs.

This may test your ability to work toward a common idea. Not every scribe is open to sharing or including others into their process.

Working in tandem on a scroll was a powerful learning experience for me, but takes courage for those involved. The key in a tandem scroll is a joint, mutual effort that needs a shared vision.


Posted by Sue G. at 3:12 PM
Email ThisBlogThis!Share to TwitterShare to FacebookShare to Pinterest