It's Kris Kinder time again. That wonderful Calontir shopping event put on by the Barony of Forgotten Sea. While it's always jam-packed with merchants and their things for you to buy, there are also meetings for you to attend.

This year Their Majesties Damien and Issabell also packed it with Laurel ceremonies. Four of them. 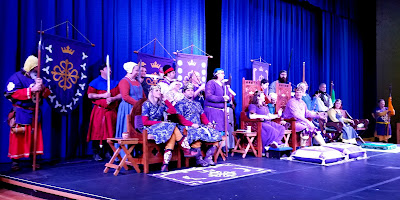 Peerage ceremonies, whether for Laurels, Pelican's, Knights or others are colorful, personalized ceremonies. They can be lengthy. So kindly Their Majesties took pity on us. They held a morning court and an evening court, with two Laurel ceremonies in each, along with other things they chose to include.


My friend HL Giraude Benet was welcomed into the Order of the Laurel in the morning court. I took many photos and have a few for you here.

Then followed a few details. The first was the presentation of YAFA tokens to Kainen Brynjolfss by Lady Adelaide Sarsfield, the Kingdom of Calontir's Minister of Youth.


Then Lady Ayisha bint Asad was called into court for her extensive work as Their Majesties' Royal Scribe. For her over-and-above efforts, they made her a Court Baroness.


The second Laurel presented that morning was to HL Kajsa Nikulasdottir. You might know her as one of Calontir's best costumers.


With morning court over you can go on to other fun things such as ...

I  rushed out of court to buy two things from Painted Sky Pottery. I was concerned all their wonderful works for presents would be gone already. I bought a mug you might receive as a prize at Lonely Tower's coming 12th Night. The other I saved for a Laurel present for M. Giraude.

But there's so much more you could do during the day.

There's sharing stories, socializing, and other happenings. A party within a party. Similar activities go on outside each vigil room while you wait your turn to visit with the new peer.

In Calontir along with the court ceremony, peer candidates spend time contemplating the new direction their life will take. To do that they "sit vigil". A time you visit with them sharing insight, stories or anything that you care to share. Each conversation is in private so each candidate has a separate vigil chamber.

There are more Calontiri you can talk with throughout the day than those near a vigil. If you aren't someone's friend you can become one.

Besides vigils and shopping, you can visit with those who sell what they make.

M. Rhodri ap Hywel is a fantasy fiction writer writing under the name Rob Howell. You can find him online through his blog too.


You might buy lunch and listen to M. Conna ingen Ui Chearbhaill's musicians' jam with their recorders while you eat. That big thing she's holding is a bass recorder.

All too soon there's evening court. With two center aisles in the auditorium, I switched to sit on the hall's other side. You never know which way people will process in. Unfortunately, where I sat this time kept me from snapping as many quality pictures for you as I wanted.


Next HL Tamar bat Avraham was welcomed into court through Isis temple pillars. She was challenged and lauded at each ceremonial step.

A large number of people came forward and were recognized for forming the new Shire of Moonstone. Lord Oswyn of Moonstone, its Senechal, received a Torse for accomplishing the required oxcart load of paperwork to form the shire.

You heard other announcements too, such as 654 people attended this huge one-day event. But my favorite was learning HL Augustin le Blinde and his wife Lady Aleit de la Thomme will become the Barony of the Lonely Tower's next Baronage at our coming 12th Night event. Hazzah!

And the fourth peerage ceremony for the day was HL Lillian Bowyer being welcomed into the Order of the Laurel. Here are the few pictures I took of her elevation.

And the grand finale...  Their Graces Hirsch and Magdalena called into court.

Their Majesties Damien and Issabell presented them with marks of favor for their abundant teaching and caring of the many people in Calontir. Hirsch Ross Eichmann and Magdalena van der Meere were each presented an Augmentation of Arms.  Now you see their new banners have a cross of Calatrava enhancing their heraldic arms.

I missed Kris Kinder last year so I am jolly glad and thankful I could attend this year. I'm grateful I arrived safe and early enough to get Giraude's scroll here before the morning court so Their Majesties could calmly sign it.

I enjoyed the event as I always do. And hope you enjoy the photos too.

Posted by Sue G. at 7:30 AM
Email ThisBlogThis!Share to TwitterShare to FacebookShare to Pinterest
Labels: Event, Kris Kinder, Photos, Shopping