I had to do it. I had to get out of Omaha's dreary, bitterly cold winter weather. So I took a tour. It was the best thing I could have done. It banished my blues and I had fun.

It was my first Road Scholar trip. My first time to St. Augustine, Florida.

I picked this St. Augustine tour because this city is the closest I could get to the pre-17th century SCA time period. Founded in 1565 by the Spanish admiral Pedro Menéndez de Avilés, St. Augustine is the United States' oldest continuously occupied settlement of European origin.

The tour presented experts and information through the city's architecture, monuments, Gilded Age works and period historic re-enactors. It included gripping tales and dramatic views of the city’s remarkable history and unique Old World charm. And we met a soldier at the Fountain of Youth and walked the sacred grounds of Timucuan Native Americans.

This is a photo array that includes tour specifics. It would be way too long if I described everything I saw and did. I will give you links to the related websites I find, hopefully not all Wikipedia.

The first full day began with breakfast and a talk by Aimee Nichols. She told us about St. Augustine before the Europeans arrived and showed us ancient Timucuan pottery chards. She's a reenactor that makes Timucuan style pottery.

Then we boarded a bus that took us to St. Augustine's Constitution Plaza for an archaeology-walk around the oldest section of town.

This excursion was led by the city's recently retired archaeologist Carl Halbirt seen here pointing us to the Constitution Monument erected in 1813. 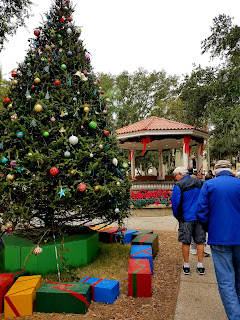 The Foot Soldiers Monument in Constitution Plaza is dedicated to St. Augustine's Civil Rights non-violent protesters who marched and protested to end segregation in the city in 1963. The small, powerful monument faces the building where the Woolworths stood, and the St. Augustine Four held a sit-in at its lunch counter protesting segregation.

You can see Carl Halbirt here in front of the Ximenez-Fatio House Museum near the fence and facing toward my camera. This house is one of the best-preserved and most authentic Second Spanish Period (1783-1821) residential buildings in St. Augustine, Florida. I tried to find it in my free time. Alas, I got turned around as I wandered the old streets unguided and didn't find it.

At every turn in old St. Augustine something was made from Coquina. It is a sedimentary rock composed of whole mollusk shells or fragments and other invertebrates. 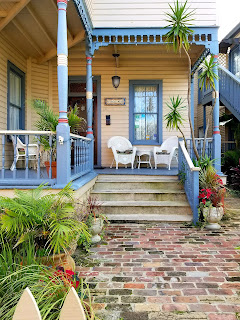 Just one of the pretty houses along our walk. 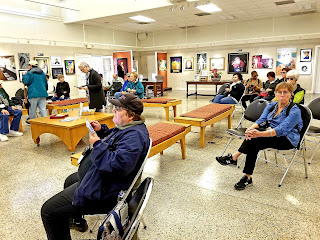 Next Mr. Halbirt took us to the St. Augustine Art Association where Elyse Brady, the gallery's Executive Director, described its history and efforts.


A few photos I took of the gallery's gorgeous art. 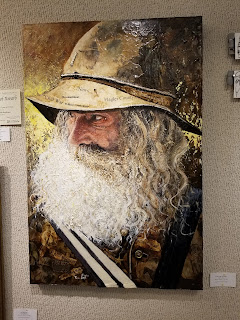 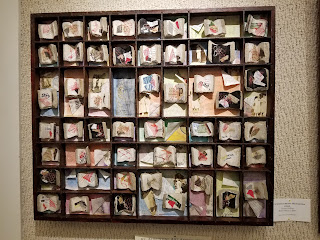 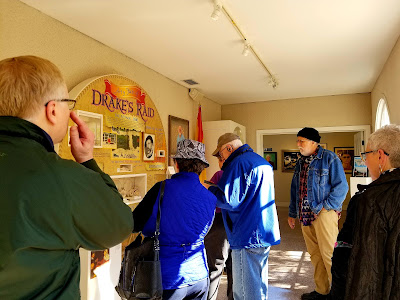 After the snack the gallery provided and Elyse Brady's talk, Carl guided us to the "Art Making History"  to learn about the archaeological discoveries found when the Art Center was expanded in 1998. 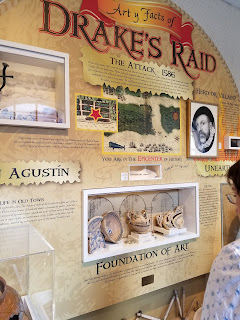 Carl, then the City Archaeologist, conducted a study of the site before construction. He found an undisturbed collection of 16th century Spanish and Native American pottery, a variety of building materials, a sewing needle and charred organic matter from Drake's Raid on St. Augustine. 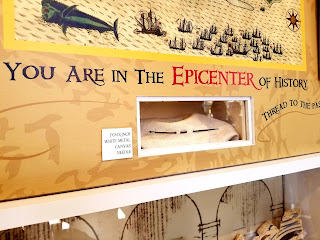 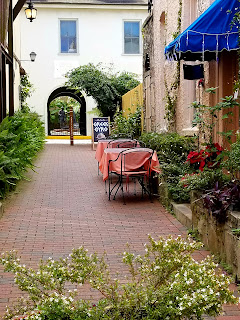 After our lunch at the A1A Ale Works we had some time to walk the streets near by. 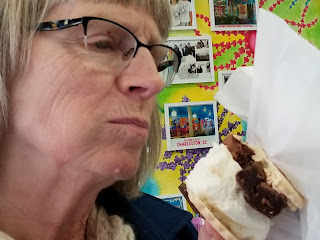 Ruth, our tour leader, had told us about the yummy ice cream sandwiches sold at Peach Pie so I ended up there. Amazingly so did five others who also just finished a big meal at A1A Ale Works. Never mind that, the ice cream was as great as Ruth told us. 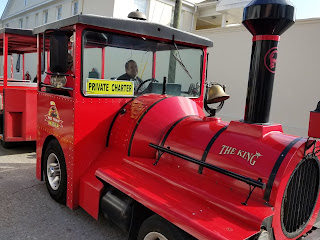 Then back to the Marina Station to board the Red Train trolly for a guided tour around St. Augustine.


A few photos I snapped while riding the Red Train. 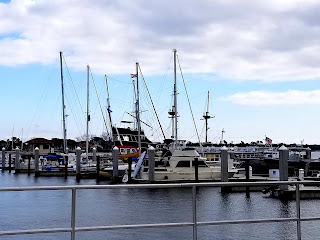 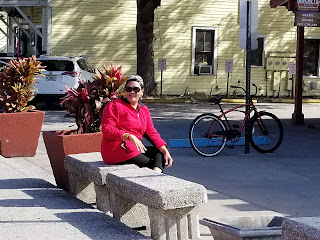 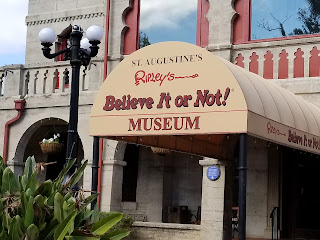 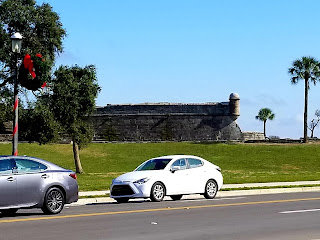 On the trolly ride, we passed the Castillo de San Marcos. This would be my best views as the government - sadly - was shut down and we couldn't go inside tomorrow as planned. 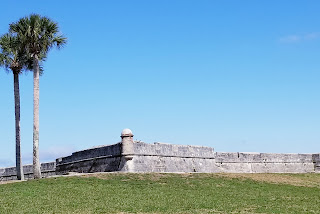 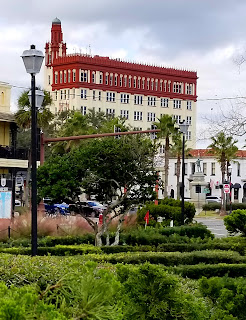 This unique building is The Treasury. Located in the heart of St. Augustine's downtown historic district. The Treasury originally opened in 1927 as the area’s central bank. With stunning architecture and elaborate Art Deco details. It is now a venue for wedding ceremonies and receptions. 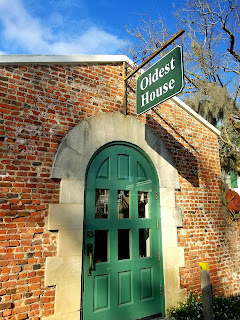 The Red Train's last stop for us was the Oldest House. Here we received a docent-led tour of its two museums, exhibition gallery, ornamental garden, and the ever-popular museum store.


At every turn, you saw beautiful gardens. 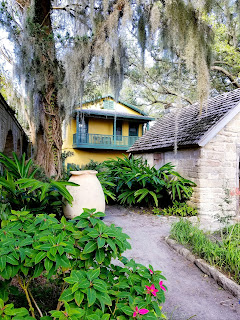 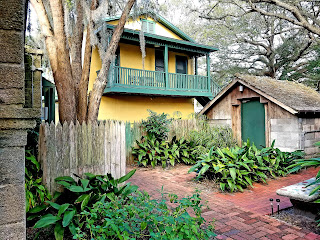 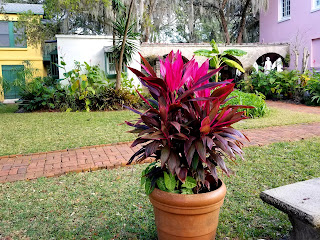 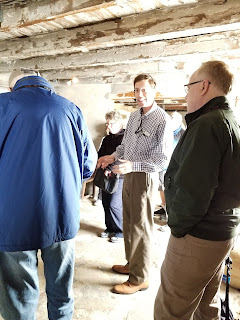 The docent at the Gonzalez-Alvarez House - the Oldest House - described details about the people living there during the First and Second Spanish, British, and American occupations of St. Augustine. He gave us a first-hand sense of each period and its characteristics enlivening the settlers daily lives. As time passed the building's use changed with rooms and an additional floor added. 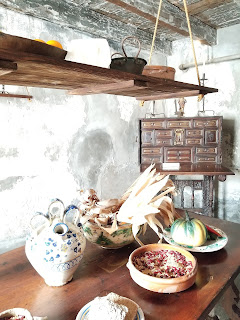 It also has limited artifacts partially due to fewer discovered or acquired the further back in time we travel. What exists is more important for the story revealed. 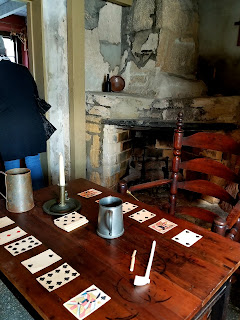 Can't imagine people's health was good. Water and home air quality were poor. Health aids were iffy. That was life as they knew it. 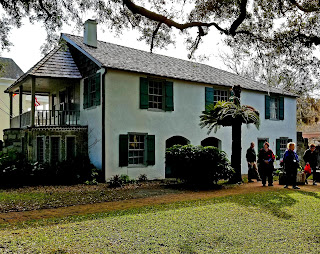 Here's the Oldest House with its additional second floor. Its first floor was built out of coquina. The upper level is framed in wood with a clapboard exterior covered by a hip roof finished with wooden shingles. 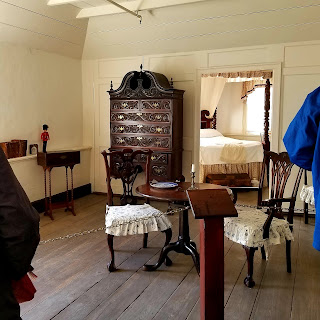 With the house later owned by a different family, the second floor shows their comparative increased wealth and less focus on acquiring daily life necessities. 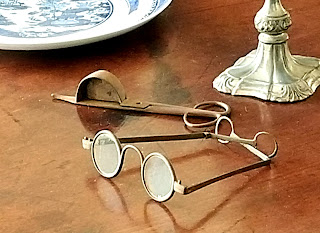 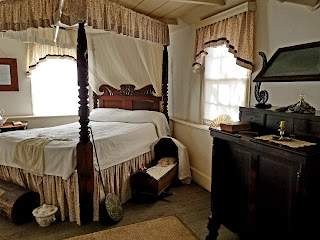 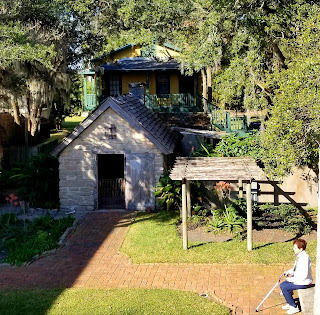 A second story view of the detached kitchen and its garden. 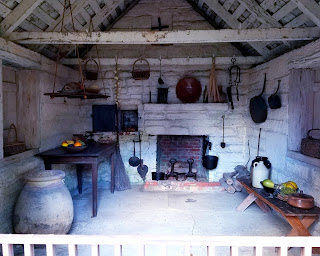 A look inside the kitchen.

Be sure to read about this amazing house, the oldest surviving Spanish colonial residence in Florida. Don't limit yourself to my description.


After our visit to the Oldest House, we returned to the hotel for a rest, dinner and time to mingle with our newfound tour-member friends. Then Charles Tingley the Senior Research Librarian at St. Augustine Historical Society helped us learn the undertold stories of vernacular architecture in St. Augustine.

A captivating long day filled with walks, talks, art, trolly rides, old buildings, and all their stories. And food. Can't forget the food.

FYI: St. Augustine is within the SCA Kingdom of Trimaris. The local group is the Canton of Lionsbridge. The closest Barony is Castlemere in Jacksonville, FL.