Every fall I declutter my garage to make way for a friend’s convertible. This year I must also squeeze in two giant trash bins the city expects me to use. And the garage has gotten no bigger.

It's a challenge, but I'm up to the task. I just have to dispose of more stuff than usual. The carts must have room next to the cars.

I began gathering the obvious unnecessary things. I refolded the humongous RV-cover and hunted down the old skis, ancient golf clubs, miles of coaxial cable, and metal awning frame. A full load crammed into my car for the thrift store. But none of the things were mine. Why were they even in my house? My garage was storage for other people’s neglected stuff.

Two days later, I sorted and merged antiques, mementos, pictures in frames, and elderly assistive devices into well-labeled boxes. The emptied shelves made space for the shuffled belongings. A trickle-down effect happening as the updated KonMari method absolved me of guilt for what I kept. 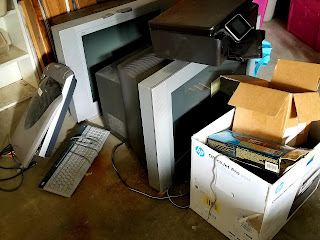 The next step removed two CRT TVs. One was mine, the other my daughter’s. (I looked at them as a slipped disc waiting to happen.) Nan and her son came and put them in my car. Packing boxes of unusable cell phones, power cords, a non-functioning drummel, and two scanners with the TVs I drove to an electronics recycling company. At last, those humongous space-hogs were gone.

Getting rid of the junk, I now saw how to use the garage storage. Moving a few shelves, I created a makeshift closet on the far end. Then crammed them with filled containers from other places.

I'm proud of the results. The encloser corralled my stuff, making room for the trash bins by the cars. And the things I took to charities will be useful for someone else.

I still need to go through the remaining chaos of framed family photos, trinkets, Christmas decorations, and a long-overlooked cache of cloth. But that boxed mess is not mere stuff. It’s my history. The trove shows who I am and what I’ve done with my life.

Posted by Sue G. at 7:00 AM
Email ThisBlogThis!Share to TwitterShare to FacebookShare to Pinterest
Labels: Bins, Cars, Decluttering, Garage, Rightsizing

Sue G.
Before I retired as a Dental Hygienist, I spent years composing medical notes. The challenge here is to loosen up my writing style by doing. To change it from a proper promenade to a light fandango. I have other interests too. Crochet, pets, history, audiobooks, friends, family, and dandelion fluff. All to support my sanity. If you want my SCA blog it's now "An Itinerant Scribe".