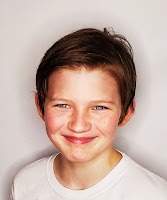 Monday I had “Grandma Duties”. I got up early, dressed, and drove across town to take my two grandkids to school. My daughter Nan told me Ben had his clothes and backpack ready, but Charlotte needed up a little early. She had a new short haircut and might want extra time to primp. And so I did.

Later that day, Nan texted me the news. Charlotte’s teacher sent her a message that her daughter came out to the class as a transgender boy.

I’d wondered about the short haircut and the athletic clothes. I wrote it off to kids growing fast and fresh interests developing. The rest of the day I mulled over what I’d said that morning, puzzling what I got wrong. I remember teasing about the short haircut being cute because it is. Later I told her she was getting too tall. (I still didn’t know about the transition.) What will I say next time I drive my barely 10-year-old to school in athletic pants and a t-shirt toting a giant backpack? To break the ice, I sent a simple message, “I love you, Charlie.”

Charlotte now prefers the name “Charlie”. The shift won’t be tough for me because re-enactors like me take an alias. I’ve switched mine twice and my SCA friends sometimes still get it wrong. Changing the pronoun is tougher.

Gender awareness is not new to my family. My oldest brother was against labels, but we all knew he was gay. I have two gay nephews and a niece living in Minneapolis. And Charlie’s stepmother has a trans grandson in college. He’s quite the holiday activity planner and I still misstate his pronouns. I love all with warmth and kindness.

We all struggle to understand while knowing for certain we love our children and grandchildren. To help them both Charlie and his mom went to counseling. I’m sure that’s how he got the nerve to come out.

But I am bothered. Outside the family, acceptance may be tough. Did you know the suicide rate for transgender people is above 40%? That’s about 34% above the general population. Did you know trans teens are at greater risk for self-harm, drug use, and ending up on the street?

Thankfully, pioneers in gender differences understood we are not all the same. Just because my grandchild wants to dress differently or use an unfamiliar name doesn’t mean he is a different person. He still is smart, is great at art, and loves riding horses. Charlie just wants to live as his true self. I'm the one who must get used to his wishes.

Posted by Sue G. at 6:00 AM
Email ThisBlogThis!Share to TwitterShare to FacebookShare to Pinterest
Labels: Change, Charlie, Transgender

Sue G.
Before I retired as a Dental Hygienist, I spent years composing medical notes. The challenge here is to loosen up my writing style by doing. To change it from a proper promenade to a light fandango. I have other interests too. Crochet, pets, history, audiobooks, friends, family, and dandelion fluff. All to support my sanity. If you want my SCA blog it's now "An Itinerant Scribe".